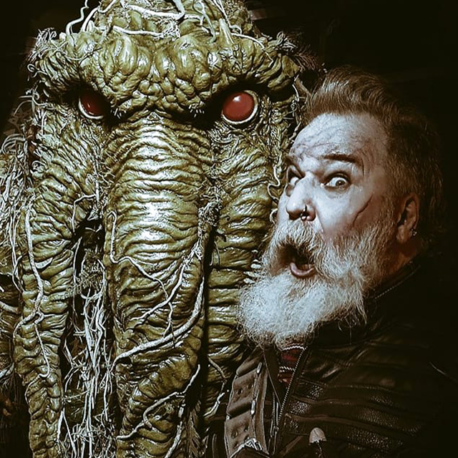 Kirk Thatcher may be recognizable as one of the judges on Jim Henson Creature Shop Challenge, but perhaps his most enduring fame is as the punk rocker on the bus that Spock pinched in STAR TREK IV and appeared again in season 2 of PICARD.

That may be changing: In 2022, Kirk starred in Marvel’s WEREWOLF BY NIGHT as “Jovan,” who had a close encounter with “Ted”—otherwise known as Man-Thing! He was terrific in it, too!

Kirk’s an Emmy and Webby award winning writer, producer, creature and production designer and film director. His career began at age 18 working for Industrial Light and Magic. He designed, built, painted, and puppeteered creatures for RETURN OF THE JEDI, STAR TREK II and III, E.T., POLTERGEIST, and GREMLINS. Following ILM, he and David Fincher set up their own company doing music videos for artists like Rick Springfield, the Motels and more. He went on to work with Disney and then the Jim Henson Company and still works for both today. He wrote and co-produced DINOSAURS (reaching new generations on Disney+) and other Muppet TV movies and shows, including  TURKEY HOLLOW and MUPPET TREASURE ISLAND.

In 2018, Kirk created and executive produced a series for Netflix entitled, THE CURIOUS CREATIONS OF CHRISTINE McCONNELL. Incredibly well-received, the series had a 100% rating on Rotten Tomatoes! He also co-wrote and co-directed the hit MUPPET LIVE Shows that played at the Hollywood Bowl and in London’s O2 stadium. Kirk co-wrote and directed MUPPETS HAUNTED MANSION for Disney and joined the writing team of Mystery Science Theater 3000!