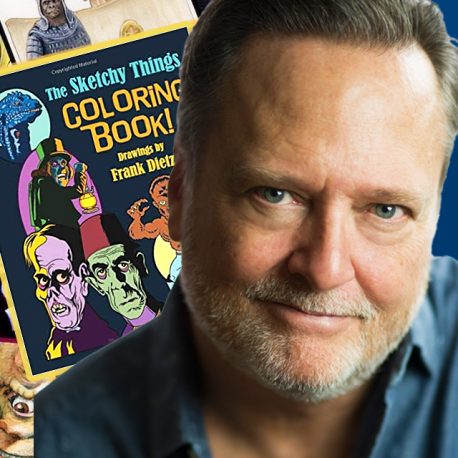 Multi-talented Monster Kid Frank Dietz is back! Frank is a writer on the TV series CREEPSHOW. His season 2 episode, “Pesticide,” was directed by our friend and returning guest GREG NICOTERO!

In 2019, a movie comedy Frank wrote, I HATE KIDS, opened, and that year he helped out animating the penguins in MARY POPPINS RETURNS. Frank is a former Disney animation artist (MULAN, TARZAN, FANTASIA 2000, ATLANTIS: THE LOST EMPIRE) and author/artist of the book “Sketchy Things: The Art of Frank Dietz.” He starred in the radio comedy WHAT ABOUT BLOB? with Brian Howe, Frank Conniff and Trace Beaulieu from MYSTERY SCIENCE THEATER 3000.

He’s a founding member of the Damn Dirty Geeks podcast, co-owner of Benevolent Monster Productions (with past guest Trish Geiger), and author/artist of the book Sketchy Things: The Art of Frank Dietz.